"Remembering a board game, Snakes and Ladders (Chutes and Ladders in the U.S.), Adam Fuss researched its original use, in ancient India, as a game of morality for young players, showing a path to enlightenment gained by good deeds. Ladders elevated players closer to Nirvana, while snakes returned them to earth. The symbolism of the snake in this context, a metaphor for the negative and corrupt, interested Fuss. For him, and in his previous work, snakes were associated with a regenerative and fluid life force, pure energy echoing the undulation of waves and the cycle of reincarnation.The snake’s dual symbolic meaning presented a paradox, and a focal point for Fuss’s recent work, which has long been concerned with the tensions inherent to opposites (male vs. female, light vs. dark). Snakes and Ladders provided Fuss with a template for a series of large scale photograms – with its horizontal, earth-bound snakes and vertical, heaven-reaching ladders, the game offers multiple dimensions and an implied journey through time and space. For several images, Fuss placed writhing snakes on a grid of newspapers, their chaotic intertwining creating a new game board, the background referencing a daily calendar or landscape of time. For others, hand-drawn trellises of varying simplicity anchor the snakes’ action. When processing the works, Fuss allowed blurred areas to occur between the grid and the snakes, providing a spatial, multi-dimensional quality to the otherwise graphic boldness of his black-and-white imagery. The snakes’ movements, inherently abstract, offer additional associations: some images, like those titled “Alphabet,” seem to reference arabesques, calligraphic texts, or gestural, expressionistic brushstrokes."
~ http://www.allartnews.com/new-works-inspired-on-childhood-games-by-adam-fuss-at-cheim-read/ ~ 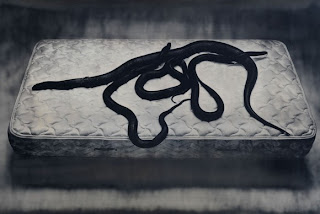 I love the symbolism he creates in his recent work. I think it is quite interesting and it makes me think. I remember my photogram days. It was so hard to figure out something that worked but you could photograph anything. His way of using such symbols are a reminder of our world today. This is an interesting article and I had to share. Enjoy.
On a side note I found two things:
http://www.cpoy.org/?s=Home (To enter in the photography contest)
http://www.photokunst.com/photographer_detail.php?artist_id=5&collection_id=35 (More awesome egg inspirations)
Posted by Linz at 9:46 AM